The Heaped Plaise of Frattery. 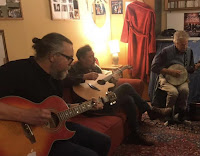 To The Snug, where a full complement of Dogs have assembled beneath the hopbines in order to [dramatic hand gesture] create. We haven’t got our heads together in the country for quite the time due to The Great Unpleasantness and so it is with some trepidation that we take to our seats, sofas, deckchairs and, in one case, exercise bicycle and collectively wonder out loud what we’re going to do. La Mulley suggests that we warm up with something we know, and so a slow, countrified version of Not That Kind of Girl is extemporised.*

Suitably warmed up, I suggest something I’ve been working on, tentatively working titled The Merchant of Venus and before long we are locked back into the familiar cycle of hesitation, repetition and deviation - almost the anti-Just a Minute, and during which we learn that Helen has never seen an episode of Taskmaster, Mr. Wendell and I discuss our top five favourite Waterboys gigs, and Turny Winn buys a snake.

Over in the corner by the Marty O’Reilly poster, Helen takes a pencil to the extended, breath-defying opening line. I suggest an alternative to one later couplet, to conclude with the phrase “…surfers in The Suez”. Someone suggests that this deliberately invites a Mondegreen, and although I agree that “…in the sewers” might perform the role admirably, it’s nowhere near that time TT wondered why ‘cokehead’ might be such a deliberate term of endearment to employ in an otherwise perfectly serviceable love song. “It’s ‘coquette’”.

Before too too long we have an acceptable demonstration version available, which we commit to Garageband for reasons of austerity and Mr. Wendell, as usual, lasers in on probable sources and influences.

“It’s that Nagasaki thing” he suggests, and I am indeed reminded** of the first night I saw Channel 4, taking a break from work in the hotel restaurant, and slumping down in front of the staff room TV to see this strange fusion of rock and folk music***, the likes I’d never heard before, and which was probably the first time I discovered something for my very own self - probably why I dove headlong into the oeuvre, and still haven’t properly surfaced to this day. I used to perform a couple of Christy Moore songs during my folk troubadour phase, and indeed I did Moving Hearts’ Hiroshima, Nagasaki Russian Roulette which it turns out has an extraordinary number of verses and is tongue-twistingly tricky at some points, and which is possibly one of the reasons that I have been venting my frustration on Helen by presenting her with similar challenges ever since.**** (My belated sympathies with various audiences in The Albion Mills, who’d probably just nipped out for a pint of mild and a game of darts and had to listen to me earnestly performing Sacco and Vanzetti instead. In front of the dart board).

I looked it up today and although I’m not sure it’s the same gig, it sure looks like it. None more eighties, even down to the hot wired Strat neck pick up and the out of phase lead guitar solo (see also The Home Service, whom I similarly fell heavily for and for whom still hold a candle).

So there you go - musical fellow travellers who know you better than you know yourself. Mind you, he’s gonna freak when he hears JJ Cale’s Carry On…