“…and Leon’s getting LARGER!” 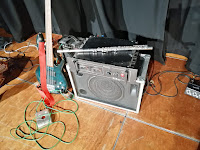 “It’s about that time of the evening - when you’ve had a dreadful day trying to corral the twins - and you finally snuggle up with a boy under each arm, fresh out of the bath, them smelling of talc, their tousled hair sticking out at angles, ready to hear the bedtime story you’ve been working your way through for the last few nights…” Helen emotes to a hushed audience, introducing the next song.

“…and then you remember you don’t have kids…” interjects Mr. Wendell, drily.

We are exploring the second rule of songwriting at The Fisher Theatre in the heart of swinging downtown Bungay, a much delayed return to the theatre of dreams which has been put off so often by the great unpleasantness that we are not sure if anyone will remember who we are from the last time we played. To be honest, a few of us are having the same issue. Nevertheless, we have been warmly welcomed to the venue by sound engineer Dan, who regards the seven-piece line up phlegmatically, and enquires as to whether we’d like onstage monitors with an air which suggests that he would really, really appreciate an answer in line with the one that small children asking if they can have a fourth chocolate biscuit wouldn’t. Of course, in order to maintain the eternal balance between the talent on stage and that of the technical expertise deployed backstage, we insist that we do. And another vocal mic wouldn’t go amiss while you’re down there…

Monitors in situ, old-school DI’s and snakes appropriately routed, we soundcheck and retire to the dressing rooms (plural) to consider our good fortune. There are mirrors, lights, an unfeasibly large collection of theatre costumes (including what looks very much like a lioness stole and a tiara, which La Mulley seriously considers adopting for the evening as a ‘look’). There are also five members of the group considering the paisley button-down which I have placed on a convenient hanger.

“Is that your shirt?” Turny Winn asks, solicitously.

“Are you planning to wear it onstage?” he continues.

He indicates the rest of the group in a manner reminiscent of a shop steward in a Carry On film from the golden age, with a waggle of his thumb.

After a lovely set from our co-traveller Tony James Shevlin, we are unleashed upon the good folk of Bungay, who seem as pleased to be back in a proper venue listening to proper music as we are. They are kind, solicitous, engaged and appreciative, and buoyed by their vibes we, in turn, take our chance to shine. Up in the gallery Dan - it turns out - has spent some of the set with headphones plugged into the console, enjoying his own private concert experience.

We relax into the show. Everyone is on top of their game. I even eschew the opportunity to do a banjo joke. That’s how in the moment we were. The theatre audience - two thirds full, not one third empty - grants us an encore.

“This is unprecedented in the history of pop music!” quips Helen. “Another song!? Well, I’m not sure we have anything prepared…”

By the time I get home, there are already laudatory comments on social media. I retire far too late (tell me about it…) with a warm glow, not entirely Pinot Noir-dependent. The next day at work a woman in a posh car drives over the cleaning equipment we’d put out to mop up the mess where some bloke had taken the opportunity to spit at me. That’s the thing about fame, fame, fleeting fame. Some days you’re the BMW, some days you’re the bucket.

Email ThisBlogThis!Share to TwitterShare to FacebookShare to Pinterest
Labels: do you do any wings, Helen and The Neighbourhood Dogs, Skirky, Tony James Shevlin