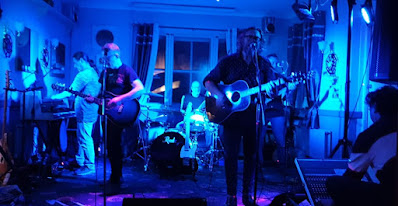 After two years of The Great Unpleasantness interfering with our plans, The Picturehouse Big Band made its return to the live arena in Stowmarket (natch) and despite fearing that we might have forgotten how these things work, by the end of the evening I think we had firmly reestablished the central tenet and mission statement of the group in that it’s just like going to the pub with your friends.

From TAFKAG’s* studious reprogramming  of his keyboard sounds during the day (he also literally dusted off his speakers, which is when he found one of the tweeters rolling around in the cabinet where a tweeter is not supposed rolling around to be), to the surprise guest singer toward the end of the set (modesty forbids identifying the party, but regular ‘Swich gig goers will be astonished to learn that he did not perform bearfoot…) we had an almost literal riot.

Admittedly Last Nite was a bit tawdry around the edges, but it was still better than The Strokes’ version, and that second encore meant that at least we got to re-do Band on the Run, but properly this time.

Many thanks firstly to my Picturehouse brethren, everyone who rocked up to a packed Pickerel (especially Linda Stix for the photo), that nice girl who played drums in the full Nell Gwynne corset and Harvey Two-Face Halloween** make up while we were packing away, Pat for PA, and lastly Greenwich Mean Time, for letting us have an extra hour in bed on the morning after.

*The Artist Formerly Known as Gibbon.

**At least I’m assuming she doesn’t go around like that all the time.

Do You Do Any Wings?
Artist, libertine, swordsman & auteur. Also guitarist, blogger & radio personality. No reasonable offer refused, half day closing Wednesdays. Occasionally I compile bits of the blog into books. You can buy All These Little Pieces and Turn 'Em All On, Then Turn' Em All Down by using those links just down there ↓ .