Back in the Garage. 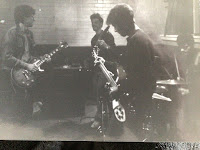 I am to commence recording again next week - honestly, the absence of pressure one feels when embarking on an enterprise that absolutely no-one has any interest at all in hearing is extraordinarily liberating - and I though that now might be the right time to revisit an old, old song of mine which came on in the car the other day and of which I was reminded that the demo we did around - I’d guess - thirty years ago had a couple of distinctly bum chords in it that we never got around to correcting, replacing or redoing - pushed, as we were, for time at the, um, time (it was a Sunday morning if I recall correctly). We probably couldn’t be bothered to demagnetise the heads again or something, and we’d already used up precious minutes forwarding the tape and then turning it over and doing it again so that it was properly stretched prior to recording.

Turns out I didn’t write down the words I now needed in my big book of things I made up out of my own head and so have spent no little time on a Saturday afternoon sitting in the car scrolling through many, many bits and bytes on a memory stick looking for something called ‘Unknown Album’, tracking down the song I need which I’m sure was somewhere in the middle of it, and then play and pausing whilst typing, then cut and pasting the fragments of lyric I *could* remember onto an iPad. This never used to happen when you had a cassette you’d mailed to yourself and a biro to wind things on with. Honestly, it would have been quicker to write a new one.