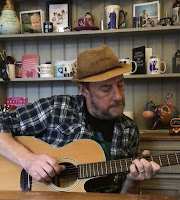 Back in the opening overs of the Great Unpleasantness, we were just about gearing up for Helstock (see blogs passim.) which in a different universe would have* taken place about a week after we were all finally told off and sent to our rooms to think about what we’d done.

A year later, it was looking as if we were going to have to postpone or cancel again, before someone in Posh North Essex suggested we (or rather, ‘they’) host one of those online virtual festival thingies that we’d been hearing so much about recently - that way we could get more players in, there wouldn’t be a venue capacity on attendees, the queues for the toilets were definitely going to be a lot shorter, and no-one would have to get nailed to anything.

Helen and The Neighbourhood Dogs had a couple of remotely recorded and edited audio-visual submissions accepted, and having been invited to submit something of my own for consideration, I went back to the neglected corner of the bookcase where I keep my big book of things I’ve made up out of my own head, blew the dust off the spine and pored through the contents with a rheumy old eye until I came across this old thing, originally written on the back of a boat** somewhere up an Irish river, probably in Cork, and originally committed to hard drive some years later on the first Songs from The Blue House album, on which Olly from Crouch Vale played spoons.

Originally a quasi-comedy interlude in gods kitchen gigs (how dare you mock my suffering!) we ended up playing it at a lock-in back in Ireland some years later which was quite the blast but, as befits my advanced maturity and attendant gravitas, I decided to rework it in a more reflective manner hoping to reach out to those many fellow travellers on the road to love’s redemption I’ve shared asphalt burns with over the years.

I believe Clapton tried the same thing with ‘Layla’.

*And indeed still might have done, depending on your philosophical bent and/or outstanding view on String Theory.

**Whilst travelling upon, not literally marked up in anti-foul paint on the stern.

Email ThisBlogThis!Share to TwitterShare to FacebookShare to Pinterest
Labels: do you do any wings, East Angliacana, gods kitchen, Helen and The Neighbourhood Dogs, helstock, home recording, Skirky, songs from the blue house

Do You Do Any Wings?
Artist, libertine, swordsman & auteur. Also guitarist, blogger & radio personality. No reasonable offer refused, half day closing Wednesdays. Occasionally I compile bits of the blog into books. You can buy 'Do You Do Any Wings?' and 'All These Little Pieces' by using those links just down there ↓ .